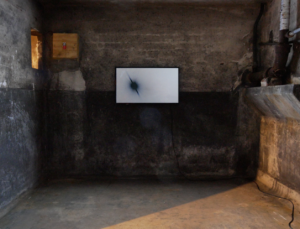 This moving image and sound work is a sequence of translations of the idea of a ‘black sun’ together with an ambient soundtrack of solar sound (made from 40 days of Michelson Doppler Imager data from between October 1996 and October 1997, processed by Alexander G Kosovichev of Stamford University and NASA), literally the ‘sound’ of the sun.
Black Sun takes as both a fictitious and literal starting point Julia Kristeva’s adoption of (in her 1989 text of the same name) Gérard de Nerval’s image of the ‘black sun’ (from his sonnet El Desdichado) as an embodiment of productive melancholy. The black sun is inside-out, a kind of oxymoron, impossible yet potent as an image, a means to focus or embody the creative experience of Hippocratic melancholy.
Black Sun is intended to be seen as an installed artwork, with no narrative, to be viewed in a manner chosen by the viewer. At De Kelder the work was also seen in conjunction with a performance event in which – using the text of de Nerval’s much-translated poem – the processes, variations, effects, opportunities and anomalies of translation were explored.
El Desdichado – Gérard de Nerval
I am the Dark One, – the Widowed, – the Inconsolable,
The Prince of Aquitaine at the abolished Tower:
My only Star is dead, – and my starry lute
Carries the Black Sun of Melancholy.
On the night of the Tomb, You who comforted me,
Give me back the Pausilippo and the sea of Italy,
The flower that so pleased my desolate heart,
And the trellis where the Pampre à la Rose combines.
Am I Love or Phoebus?… Lusignan or Biron?
My forehead is still red from the Queen’s kiss;
I dreamed in the cave where the mermaid swims…
And I have twice victoriously crossed Acheron:
Modulating in turn on the lyre of Orpheus
The sighs of the Saint and the cries of the Fairy.